skip to main | skip to sidebar

What happens when a group of artists joins forces with a group of writers to figure out what myths define life in the 21st Century? The answer is coming this September, when re:myth will be on display for three weeks at Gallery ConneXion.

It started with an idea from Amanda Saulnier, artist and spokesperson for Fredericton’s Emerge Artists Collective. “The idea came to me in an Emerge brainstorming session,” said Ms. Saulnier. “We’ve never collaborated outside of our group and I thought we needed to branch out. Fredericton has a thriving artistic community, but rarely do we work together to create something like this multidisciplinary exhibition.”

Amanda, contacted Fredericton’s notorious writers’ collective, the BlackTop MotorCycle Gang (BTMG), and the fun began. Thirteen members of the BTMG wrote 16 pieces on what they felt were the new mythologies of the 21st Century, from consumer branding gods to re-enlightened Buddhas. The writers ranged from aspiring amateurs to locally and internationally acclaimed writers like Beth Powning. The pieces ranged from traditional poetry to experimental fiction and even a story told in Twitter tweets.

“I was amazed and instantly enthused when I first heard the idea in January of this year,” said Joe Blades. “I immediately wrote to my fellow poetic hog riders and tarmac bums in the BTMG to get their responses.

“We were told to write whatever we wanted, in whatever style we wanted,” said BTMG member Biff Mitchell. “Some members wrote more than one piece … and still wanted to write more.”

A similar thing happened with the Emerge artists. “The response was overwhelming,” said Amanda. “Some of the artists were asking for more pieces from the writers.”

Emerge artist, Joss Richer said, “I was rather excited when I heard that my group of artists, Emerge, would be collaborating with members of the Black Top Motorcycle Gang—a group of writers I am quite fond of. I was assigned two writings to respond to. To this day, I do not know the author of each submission. I could have found out already, but decided that I would wait as long as possible before satisfying my curiosity. Above all, I wanted my response to be based on the writings alone, and not on my knowledge of the personality of the authors.”

During a BTMG reading last winter at Gallery ConneXion, one of the writers announced the project and mentioned they were looking for a gallery to exhibit the show. Meredith Snider, curator of the gallery immediately called out, “Have your show here!”

“This collaboration between the BlackTop MotorCycle Gang and Emerge is a wonderful example of exchange and dialogue between artists,” said Ms. Snider. “I’m really looking forward to seeing this exhibition and encourage others to come out to the opening reception to see the work and speak with the artists.”

BTMG member Andrea Kikuchi, after struggling for months with writer’s block, was inspired by the project. “I was immediately excited and felt the inspiration I haven't felt in months flow back. I decided to finish the story and submit it, anxious to see how the artists will interpret it,” said Ms Kikuchi. “I am so grateful to be a part of this original concept. It promotes a new wave of creativity that bridges all forms of art and continues to inspire us all.”

“I look forward to seeing all the work and the artists in the same space,” said Ms. Saulnier. “It will be interesting to see how the writers respond to the visual work. This truly is the beginning of a dialogue that I hope will continue in the future.

The re:myth exhibition will open on September 2 at 7:00 PM in Gallery ConneXion’s 1922 Gallery, 440 York Street (in the Chestnut Complex), Fredericton, NB. There will be opening remarks and readings from members of the BlackTop MotorCycle Gang.

Emerge Artists Collective
Our aim is to increase the exposure of emerging artists and craftspeople. Through shared knowledge and experience, we develop an awareness of the exhibition process and its intricacies. We strive to ease the transition between the creation of the work of art and its exhibition to the art community and the public. Our collective counts a dozen members. Our work is eclectic, sometimes edgy; our focus is on non-traditional approaches to art. Our work includes drawing, painting, sculpture, metal and clay work, collage and assemblage, fabric, photography, video and music, and more. Since its inception in 2004, Emerge has held thirteen exhibitions in various locales around New Brunswick.

BlackTop MotorCycle Gang
BlackTop MotorCycle Gang is a collective of eclectic writers who stage spontaneous “reading raids” in various locations and are frequently invited to appear at special events of a literary nature. There are currently 39 members spread from coast to coast. Membership is open only those considered weird enough by any two current members.

In a statement from Meredith Snider: “The board, staff and membership of Gallery ConneXion are grateful to the following companies and people for donating their labour and time to renovate the second gallery space this July 2010; Fabinex (carpentry work), Hector Tovar (crack filling), members of the Fredericton Pride Committee (painting). Your contribution to Fredericton's artist-run center is sincerely appreciated.”Gallery Coordinator, Meredith Snider: 506 454-1433, connex@nbnet.nb.ca www.galleryconnexion.ca
Posted by Joe Blades at 7:02 AM 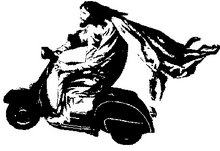